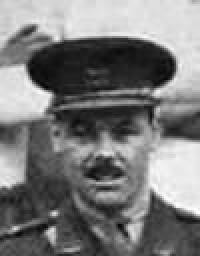 Home address given as Kirby Muxloe. Educated at Wellington College (during which time he played rugby for Leicester Public Schools in 1925) and RMC Sandhurst, 'Fred' Drummond was commissioned into The Leicestershire Regiment on 2.2.1928, and served initially in 2nd Bn up till 1930. After 3 years in 1st Bn in India (Promoted Lieut. 2.2.1931), he served at the Depot from 1934. He was a member of Stoneygate RFC and was elected captain 1934-35. He also played rugby for Leicester Football Club (30 caps, 1930-35) and the Army, and won a Leicester county cap. From 3.10.1935 he was seconded for service in The King's African Rifles (KAR), and in 1936 was serving in 4th KAR in Kenya. He was promoted Captain on 29.7.1937. At time of his death from wounds in East Africa aged 32, he was attached to the 1st KAR. He is buried in Nairobi War Cemetery, Kenya. His Leicester FC cap is in the Regimental Museum.

Do you have more information about Captain Frederic Cecil Drummond ?

If you have any further information or photos regarding Captain Frederic Cecil Drummond that you believe we could publish, please click here to contact us.