Joined the Regiment 21.5.1897, aged 14 years and 6 months. Served in the Boer War. Promoted to Corporal 3.11.1905, and appointed Band Corporal 1908. Promoted to Sergeant 11.1.1910, and Colour Sergeant 16.12.1912. He was noted as a Battalion hockey rugby player. Served in World War One, and was taken Prisoner of War in 1914. Received Long Service and Good Conduct Medal. Discharged 16.4.1919. Later received Defence Medal for services in World War Two. He died in about 1967-68. Some of the information is from private source. His medals are in the collection of Leicester City Museums Service. See also records for his brother, Thomas Frank Hickman, and his father, Frederick Charles Hickman. 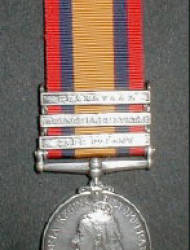 Do you have more information about Colour Sergeant Charles Neary Hickman ?

If you have any further information or photos regarding Colour Sergeant Charles Neary Hickman that you believe we could publish, please click here to contact us.