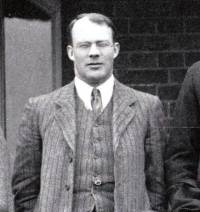 Harold Hartley was educated at Dulwich College, Croydon, and at Balliol College, Oxford, from where he graduated in 1900 with 1st Class Honours in natural science (chemistry and mineralogy). He remained at Balliol, and in 1901 became Natural Science Tutor and Bedford Lecturer in Physical Chemistry, a position which he held until 1931. He was also made Jowett Fellow of Balliol (1928-1931) and then a Research Fellow (1931-1941). The photograph was taken in 1913 when he was aged 35.
When the First World War broke out, Hartley served initially in 7th Bn The Leicestershire Regiment (1914-15) as a captain. In response to the need to counter German gas attacks he transferred to the Royal Engineers in summer 1915 and was appointed as Chemical Adviser to the 3rd Army (1915-17). In 1917, newly promoted to lieutenant-colonel he was made Assistant Director Gas Services at GHQ in France, and at the end of the war as Brigadier-General he was made Controller of the Chemical Warfare Department at the Ministry of Munitions (1918-1919). For his war services, Hartley was awarded the M.C. in 1916 (L.G. 14.1.1916), was Mentioned in Despatches three times, and appointed O.B.E. in 1917 and C.B.E. in 1919, relinquising his commisssion that year (L.G. 24.10.1919). Thereafter he became a noted physical chemist and industrial consultant.
In 1919, Hartley served as a member of the Holland committee on the future of chemical weapons and continued as the senior scientific adviser to the Government on these issues during the 1920s and 30s, serving on the Chemical Warfare Board until 1950. He was made a Knight Bachelor for this work on 1.1.1928. He had returned to academic life after the First World War, combining teaching physical chemistry at Balliol with other work. In his own research, he concentrated on studying the electrical conductivity of solutions, work for which he was elected a Fellow of the Royal Society (FRS) in 1926. He was Director of Research at the Gas Light and Coke Company (later the North Thames Gas Board), where he was to remain on the board until 1945, serving as Deputy Governor during the Second World War. Hartley was also concerned in the development of chemical industry. In 1929 he joined the Fuel Research Board of the Department of Scientific and Industrial Research, which he later chaired (1932-47), and some years later served as Honorary Adviser on the development of home-produced fuels at the Ministry of Fuel and Power (1939-1947).
Hartley resigned his tutorial fellowship in 1930 to become Vice-President and Director of Research of the London, Midland, and Scottish (LMS) Railway Company, also chairing the new Railway Air Services (1934-45). He was made K.C.V.O. in 1944 (L.G. 1.1.1944). Continuing his interest in air travel, he then became Chairman of British European Airways (BEA) 1946-47 and then of the British Overseas Airways Corporation (BOAC) 1947-49. He then became the first chairman of the Electricity Supply Council (1949-52), later acting as consultant to the Central Electricity Generating Board (CEGB).
Hartley retained his interest in science and the chemical engineering industry, with positions including: President of the British Association for the Advancement of Science (1950); President of the Institution of Chemical Engineers (1951-52 and 1954-55) and of the Society of Instrument Technology (1957-61); scientific adviser to the construction firm John Brown (1954-61); Chairman of the British National Committee and International Executive Council, World Power Conference (1935-50) and the Fourth World Power Conference (1950); President of the World Power Conference (1950-56); Chairman of the Energy Commission, Organization for European Economic Co-operation (1955-56). He was advanced to G.C.V.O. in 1957 (L.G. 1.1.1957). Hartley kept on touch with his old school, Dulwich College, and was President of the Old Alleynian Society in 1935. He also had a particular connection with the Goldsmiths' Company, and was its Prime Warden (1941-42). He was made a Companion of Honour (C.H.) in 1967 for services in scientific and public affairs (L.G. 10.6.1967).
Thrice knighted (1928, 1944 and 1957), this illustrious Tiger's publications include: "Balliol Men" (1963); editing "The Royal Society: its origins and founders" (1960); "Man and Nature" (Romanes Lecture 1964); "Humphrey Davy" (1966); and "Studies in the History of Chemistry" (1971). 385 archive boxes of his papers are housed in the Churchill Archives Centre, Oxford.
He died in 1972, aged 94 years.

If you have any further information or photos regarding Brigadier-General Harold Brewer Hartley - GCVO CH CBE MC FRS that you believe we could publish, please click here to contact us.