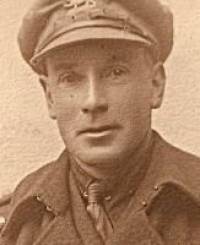 John Dixie-Smith was educated at Oundle School. Between 1902 and 1912 he played rugby for Leicester Football Club, making 132 appearances for the 1st XV, scoring 27 tries and 81 points. He also played 49 times for Northampton (1901-03), and once each for Nuneaton and Nottingham. He was commissioned into The Leicestershire Regiment as a 2Lt on 11.1.1915., and joined 8th Battalion, entering France on 29.7.1915. Promoted Temporary Lt on 26.9.1916 and became Adjutant of that Bn on 27.9.1916. Transferred to the Unemployed List on 5.1.1919. Relinquished his commission on 28.10.1920.
He was also a fine all-round cricketer - a right-handed batsman, although his bowling style is not known. Following the First World War, Smith made two first-class appearances for Leicestershire in the 1921 County Championship against Gloucestershire and Glamorgan. He scored 30 runs in his two matches with a high score of 25 and a batting average of 7.50.
He was also known as John Willoughby Dixie Smith.
He died in 1959, aged 77 years.

Do you have more information about Lieutenant John Willoughby Dixie-Smith ?

If you have any further information or photos regarding Lieutenant John Willoughby Dixie-Smith that you believe we could publish, please click here to contact us.