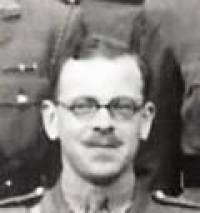 Educated at Eton College (where he captained the fencing team) and Christ Church, Oxford University (where he read Greats and was a fencing Blue), Tony Cripps was commissioned 2nd Lieutenant in 5th Bn The Leicestershire Regiment (TA) on 6.8.1933, and promoted Lieutenant 6.8.1936. Called to the Bar in London by Middle Temple in 1938, he joined the chambers of his uncle Sir Stafford Cripps. During the Second World War he was mobilised in 5th Bn. He served in Norway with the 1/5th Bn in Apr/May 1940, escaped capture and was interned in Sweden for a while, returning to England in the autumn of 1940. Promoted to Acting Major 23.10.1941 and joined 2/5th Bn at Dymchurch. Served with that Bn in Algeria and Tunisia, and was awarded the D.S.O. (L.G. 20.4.43) for his actions as Company Commander at Montaigne Farm, Tunisia, 26 Feb-6 Mar 1943. For a time was Acting CO in Italy in Oct 1943 and later 2IC of 2/5th Bn in Italy. Attended the Staff College at Haifa and subsequently served as Staff Officer in Palestine and Syria 1944-46. Awarded T.D. (L.G. 12.9.1947). At the end of hostilities he returned to the Bar and soon established himself as an expert on agricultural land law, publishing two books. He was made a Q.C. in 1958, and as a judge he was Recorder of Nottingham from 1961-71, being appointed C.B.E. in New Year's Honours 1971 for his work in the judiciary. He also sat as a High Court Judge on several occasions. From 1978-94 he was Deputy Senior Judge in the British Sovereign Base Areas of Cyprus. He was chairman of the Reigate Conservative Association 1960-64.
He died in 1997, aged 83 years.
He was the brother-in-law of Lt Col J G E Scott OBE of the Regiment.

If you have any further information or photos regarding Major Matthew Anthony Leonard Cripps - CBE DSO TD QC that you believe we could publish, please click here to contact us.