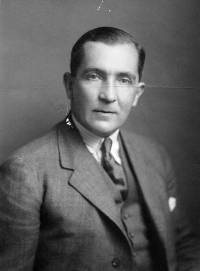 Educated at Marlborough College and at Gonville & Caius College (Cambridge University) (where he embarked on an MA in Mathematics and was in the OTC for two years), George Carter interrupted his studies at the outbreak of the First World War. He was commissioned as a 2Lt into 5th Bn The Bedfordshire Regiment on 29.8.1914, and served in 6th Bn The Leicestershire Regiment from 1914-1917, entering France in July 1915 and also serving in Flanders. Having reached the rank of Captain, he served in the Royal Engineers where his work in the Sound Ranging section 1917-19 involved the early development of sound ranging as a means of detecting enemy gun positions. He was wounded in the head on 11.3.1917. On 10.8.1917 he received a gunshot wound in his right leg at Fontaine while attached to 9th Bn The Royal Welsh Fusiliers and hospitalised for a while. He was discharged from the Army on 16.2.1919.
After the war, he returned to Cambridge and he changed subjects from Mathematics for Part II of the Natural Sciences Tripos in Zoology, in which subject he gained a First Class MA and was awarded the coveted Frank Smart Prize and Studentship in 1921. He later was awarded a PhD by Gonville & Caius College. He obtained a post at the Stazione Zoologica in Naples where he worked 1922 to 1923 before receiving a post as a lecturer in Zoology at Glasgow University. He was elected a Fellow of the Royal Society of Edinburgh (FRSE) on 9.3.1925. He stayed at Glasgow until 1930, then returned to a Lectureship in Cambridge and a Fellowship of Corpus Christi College, holding the former till his retirement in 1960 and the latter until his death, lecturing there from 1938 until retiring in 1960.
He was a Fellow of the Linnean Society (FLS) and of the Zoological Society (FZS). He wrote many zoological papers and was the author of five books: ‘A General Zoology of the Invertebrates’ (1940), ‘Animal Evolution’ (1951), ‘The Papyrus Swamps of Uganda’ (1955), ‘A Hundred Year of Evolution’ (1957), and ‘Structure and Habitat in Vertebrate Evolution’ (1967). He died in 1969, aged 76 years.
In The National Archives at Kew there is a paper file WO 339/12005 covering his military career 1914-19.

Do you have more information about Captain George Stuart Carter - FRSE ?

If you have any further information or photos regarding Captain George Stuart Carter - FRSE that you believe we could publish, please click here to contact us.