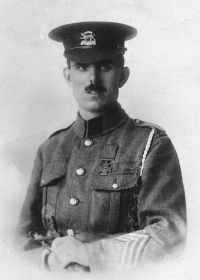 Their father died tragically at New Spring Road, Kempston, of pulmonary tuberculosis age 19. The boy's mother had difficulties in bringing the boys up and by May 1889 the family was living in Howbury Street, Bedford, and was receiving outdoor relief from the local Board of Guardians. William Billington was admitted to the Bedford Union Workhouse on 17.5.1889 (aged 3 years) as his mother was no longer able to care for him. He was shown as being at the Workhouse in the 1891 census. His brother Frederick was living with his maternal grandparents.

Their mother, Annie, moved to Leicester at this time, settled, and married Thomas Henry Buckingham, aged 18 years, possibly met whilst working in a factory. They had a son, Joseph Henry Buckingham, on 19.11.1891. Problems arose at bringing up this son, who was admitted to the Leicester Union Workhouse on 21.4.1892. Both William and Frederick were transferred to Leicester where the boys adopted their stepfather's name, returned to the workhouse and subsequently were transferred to Countesthorpe Cottage Homes. William became a boy soldier and his brother Frederick joined the Royal Navy.

[Above truncated text has been taken taken from 'A Tiger and a Fusilier'. Its author, Derek Seaton has thoroughly researched William Buckingham's life and published in detail the historical details.]

William Buckingham was brought up in Countesthorpe Cottage Homes by Mr and Mrs Harrison. His mother was still alive although this was not discovered until after he was awarded the V.C. He enlisted in November 1901, and joined 2nd Bn The Leicestershire Regiment in India. On the outbreak of the First World War, 2nd Bn as part of the Garwhal Brigade of the Meerut Division of the Indian Army Corps deployed to France. Buckingham was awarded the Victoria Cross 'for conspicuous acts of bravery and devotion to duty in rescuing and rendering aid to the wounded whilst exposed to heavy fire, especially at Neuve Chapelle, on 10th and 12th of March 1915' (London Gazette, 28.4.1915). The VC was presented to him by HM King George V at Buckingham Palace on 4.6.1915. He was promoted to LCpl and was based at The Depot at Glen Parva Barracks, and employed with recruiting in the county. He then gave up his stripes and returned to France, joining 1st Bn where he became orderly to Captain JWE Mosse (OC A Company, and whose father was CO of the Depot).

1st Leicesters moved into the attack position during the night of 14 September 1916 and were ready to engage the enemy by 4.30 am on the 15th. Zero Hour for the infantry attack was fixed for 6.20 am with the Battalion and the 9th (Service) Battalion The Norfolk Regiment facing the north-east along a line of trenches due south from Ginchy. The attack commenced on time and the battalion encountered heavy machine-gun fire from the 9th Bavarian Regiment to whom they were directly opposed. Casualties were extremely heavy and amongst those killed in action that day was William Buckingham VC of A Company. Typically, he fell as he advanced to the aid of wounded comrades. He had just cleared a parapet when he was hit in the thigh and head by machine-gun fire and was killed instantly. He was 30 years old. His body was never recovered, and his name is among the 843 men of the Regiment commemorated on the Thiepval Memorial on the Somme.

His medal and some personal effects are displayed in the Regimental Museum.

In 1961 during its development and expansion the village of Countesthorpe honoured one of its bravest former sons by naming a road after him 'Buckingham Road'. Later, in 1986, after adding his name to the village War Memorial from which it had inexplicitly been omitted sixty years before and no one had noticed, the Parish Council further honoured his memory by erecting a bronze memorial plaque on a granite plinth in Buckingham Road.

On 12 March 2015 - the centenary of the action for which he was awarded the VC - a VC commemorative paving stone to Pte William Henry Buckingham VC was erected at St Andrew’s Church, Countesthorpe. He was also awarded a Leicestershire County Council 'Green Plaque' which was placed on a nearby school at which he had been a pupil. 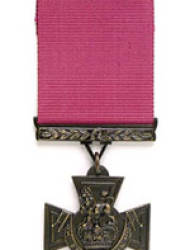 Do you have more information about Private William Henry Buckingham - VC ?

If you have any further information or photos regarding Private William Henry Buckingham - VC that you believe we could publish, please click here to contact us.