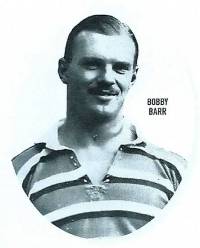 Educated at Stamford School, Bobby Barr played rugby for Leicester Football Club 241 times between 1928 and 1938, and was Captain 1936-38. He also played once for the Barbarians F C in 1935, and three also times for England. He also played cricket occasionally as a wicketkeeper/batsman for Leicestershire CCC's 2nd XI. Commissioned 2Lt in The Royal Engineers on 19.7.1939, he served in 44th (The Leicestershire Regiment) Anti-Aircraft Battalion RE (TA), which converted to a Searchlight Regiment RA in 1940. Serving in a different unit he was captured in May 1940 during a rear-guard action at Boulogne, and was awarded the M.C. for ‘gallant and distinguished service in the defence of Calais in May 1940’ (L.G. 20.9.1945). He was a prisoner of war in Oflag VII B as at 28.2.1943, where at Eichstaet in Bavaria he was a member of the escape committee and escaped himself, being captured four miles from the Swiss border. He was repatriated in 1945. In 1949 he was serving as a Captain in 579th (The Royal Leicestershire Regiment) Light Anti-Aircraft Regiment RA (TA) in Leicester. After the war he founded the hosiery brand-label manufacturing firm of 'Barr, Ratcliffe and Co' at Sileby and Oadby, and became a member of the Worshipful Company of Framework Knitters. For Leicester FC he was Team Secretary 1946-57, Honorary Secretary 1957-62 and President 1962-65.
He died in 1975, aged 68 years.

Do you have more information about Captain Robert John Barr - MC ?

If you have any further information or photos regarding Captain Robert John Barr - MC that you believe we could publish, please click here to contact us.