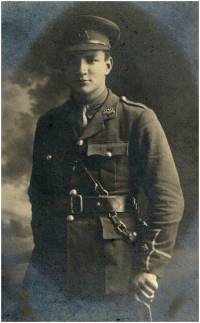 Godwin Banwell was educated at Merchant Taylors' School (then in the City of London). There he was a forward in the 1st XV rugby team; in the OTC he reached the rank of Company Sergeant Major, and during the 1915 summer holidays he was attached as an instructor to a battalion of The London Regiment at Tidworth. He was commissioned into 1/5th Bn The Leicestershire Regiment in Jan 1916. He was wounded at Gommecourt on 1.7.1916, gassed on 21.6.1917 and wounded another four times, once as a Captain. Awarded the M.C. as a 2Lt (L.G. 25.8.1917) and Bar as an A/Capt (L.G. 14.2.1919) - for citations, see below. After the War he came second in the examination for the Indian Police Force, and served in the Indian Police Service 1919-39, mostly in Burma. Awarded the O.B.E. for work as Officiating District Superintendent of Police, Pegu, Burma (L.G. 15.12.1930) and King's Police Medal for his actions after an earthquake at Pegu on 30 May 1930 (L.G. 1.1.1931) - for citation, see below. Awarded Indian General Service Medal with clasp 'Burma 1930-1932'. Later he became Deputy Commissioner of Police in Rangoon.
After his return to England in 1939, he was Staff Officer to the Chief Constable of Durham 1939-42, and Chief Constable of the East Riding Police Force 1942-46. He was Chief Constable of Cheshire 1946-63. He was awarded Queen Elizabeth II's Coronation Medal, the C.B.E. (L.G. 9.6.1955) and the Queen's Police Long Service & Good Conduct Medal. He was appointed an Officer (Brother) of the Order of St John of Jerusalem (OStJ) on 4.7.1958. He died in 1981, aged 84 years. His medals are held on the Museum of Policing in Cheshire.

Citation for M.C. (L.G. 25.8.1917): "At Fosse 3 de Lievin, SW of Lens, on the night of 7/8 June 1917 this officer and a small party carried out a most successful enterprise in which a very strong belt of wire which was not under artillery observation and which would have inevitably held up our attack on the ensuing day was completely destroyed. This work was carried out close to enemy posts and in bright moonlight. On 8/9 June during the attack on Fosse 3 de Lievin this officer set a fine example of courage in clearing the enemy trenches - driving out the enemy posts and bombing attacks. On one occasion when with only one man, he was clearing a trench and met four of the enemy. Although he had no bombs and had expended all his ammunition, this officer rushed the four Germans - killing one with the bayonet on which the other three fled. During the attack this officer accounted for eight of the enemy with the bayonet alone. He set a magnificent example to the attacking troops."

Citation for Bar to M.C. (L.G. 14.2.1919): "He and Captain Petch MC, during the advance on 29 September 1918, led their companies in a most gallant and able manner, keeping in touch in the fog and accomplishing a difficult movement. They gave each other mutual support and in the face of heavy fire stood up and signalled to each other when ready to advance and so brought the whole line forward to the final objective."

Citation for K.P.M. (L.G. 1.1.1931): "...When Pegu was devastated by an earthquake and fire on the night of 5 May 1930 (claiming the lives of over 500 people) Mr Banwell displayed the greatest power of control and organisation. About 20 minutes had elapsed and the town was ablaze before he could get down, there was panic and confusion. He got his men in hand, organised proper patrols, and reduced chaos to order very rapidly, while the same time directing and taking part in such rescue work as possible. He extracted one man who was pinned by fallen debris at considerable risk to himself when fire was all but on him. He dealt with a panic in the sub-jail where 150 prisoners made threatening disturbances when sparks were blown in and got them all safely out of jail with a very exiguous guard, and got them back an hour or so later without mishap. It was due to his thoroughness of his improvised organisation that there was no looting and no violence."

Reference/Recommendation by Lt Col J D Hills MC (sometime Adjt, 2IC and CO 5th Bn The Leicestershire Regt (TA), of The Hopgarden, Eton College, Windsor):
"During the war Mr G E Banwell served with great distinction in the 5th Bn The Leicestershire Regiment. Commanding a company throughout the fighting in 1917 and 1918, he was five times wounded, at least once recommended for the VC and awarded the MC and Bar. His company, the best disciplined and happiest in the battalion, followed him cheerfully through any danger and hardship, knowing that there was no risk or responsibility that he wouldn't share with them and confident that his friendship and support were always at their service. While he showed no mercy to shirkers or crooks, he kept the loyalty of all honest, ordinary soldiers. His discipline was unshakeable, but he tempered it with a lively sense of humour and a sympathetic understanding to all rank and file. He was as popular with his brother officers as in his company lines."

During the First World War there were at one time and another seven Old Merchant Taylors serving in 1/5th Battalion The 5th Leicestershire Regiment. Three were killed in action: William Maurice Cole MC, Percy Measures and Revd Cyril Bernard Wilson Buck MC. At the end of the war the 4 surviving officers (Godwin Edward Banwell MC*, John David Hills MC*, Donald Burman Petch MC* and John Cridlan Barrett VC) presented a trophy to the school – The 5th Leicestershire Trophy, Inter-House Athletic Sports Championship – to commemorate this fact. The trophy has since 1982 been awarded to the School's 'Most improved rugby player - senior'.

The deeds of these seven OMTs (and others who served in the Battalion) are covered fully in the book ‘1/5th Battalion the Leicestershire Regiment in the Great War’, by Captain J. D. Hills MC (himself an OMT) which was first published in 1919. Its review in Old Merchant Taylors’ magazine stated,
“This book claims to be a record of the progress of a territorial battalion during the war from mobilisation to demobilisation. To say that it completely attains its object is to give it less than its due. It is in reality much more. “Mutatis mutandis”, it is an epitome of the life of any of the best territorial battalions from 1914 to 1919. The reason why the majority of books on the war are unsatisfactory and untrue is that their authors are either journalists or would-be journalists. They strive to give the public what the public is supposed to want – “purple” passages, isolated incidents, lurid and harrowing descriptions – with the result that their work is already voted stale and unprofitable. In this book the author has steadfastly resisted all temptations of “ fine writing”, he has preserved his sense of proportion throughout, and has given us a plain and unvarnished account of the daily work, the joys and sorrows, the life in the line and out of it of one of the finest battalions of the first Territorial Division to cross the Channel. It is to books like this that the student of history in days to come will turn for a true account of the doings of our hard-fighting and seldom praised County Regiments. It is a pity that there are so few of them. So much for the book in general. But to us Merchant Taylors it has a much more intimate appeal, for it gives us a glimpse of the work in France of Old Boys who, a few months before, had been working and playing beside us at the School. We read how Lieut. J. C. Barrett, V.C., “literally covered with wounds,” after disposing of three enemy machine-gun posts and their teams and overcoming the bombing-parties which assailed him, extricated his men from a perilous position before he, refusing all help, made his own way back to the Aid Post. We learn how the late Second-Lieut. W. M. Cole, M.C., accompanied by his corporal, stalked a German sentry, shot him, noted his regiment for purposes of identification, and made his way back to our line under heavy machine-gun fire – a feat well described as “a very fine piece of patrol work, calling for courage, initiative and cunning of a high degree.” This gallant young officer, whom we remember with deep affection, died of wounds ten days later, on the day on which the Military Cross was awarded him. The names “A” Company (Petch) and “ C ”Company (Banwell) have a familiar ring about them, – we note with pride that these two officers – the former thrice, the latter six times wounded – together with the author of the book, are three out of the four officers of the battalion who won the MC and bar. Finally, we deduce a great deal concerning the author himself, who sailed to France with the 5th Leicestershires, and returned to England in command of their “cadre” in June 1919. He had during that time served throughout the war with his battalion and filled every possible place in it. We feel that he was the best man to write its history and that he could not have done it better.”

Do you have more information about Captain Godwin Edward Banwell - CBE MC* KPM ?

If you have any further information or photos regarding Captain Godwin Edward Banwell - CBE MC* KPM that you believe we could publish, please click here to contact us.