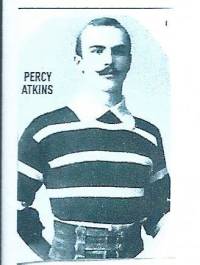 'Percy' Atkins was a fine rugby player. Originally a centre or wing, he subsequently moved to the pack. He made his debut for Nuneaton in 1895/96, scoring 15 tries in 24 appearances before joining Leicester Football Club in 1897. Between 1897 and 1906 he made 186 appearances for the club’s 1st XV times, scoring 42 tries. He also had an England trial. Between 1893-1914 he was Secretary of Hinckley RFC, having been a founder member of both the local rugby and cricket clubs. He was commissioned 2Lt in 1st Volunteer Battalion The Leicestershire Regiment on 14.6.1899, and from the formation of the Territorial Force in April 1908 he served in the 5th Bn. He was a fine rifle shot and represented the Army at the National Championships at Bisley. Promoted Captain 20.3.1901 and still serving as Captain with 'D' Company 5th Bn in 1912. Resigned his commission on 19.7.1913 and re-enlisted as a Captain in that Bn on 21.10.1914, serving in 2/5th Bn during World War One. As a Major he was attached to the Army of United States of America, entering France on 9.5.1918 and served as Chief Instructor of Sniping. Discharged from the Army on 28.2.1923. In the Second World War he commanded the Wolvey Home Guard. He died in 1958, aged 81 years.

Do you have more information about Major Hugh Percival Atkins ?

If you have any further information or photos regarding Major Hugh Percival Atkins that you believe we could publish, please click here to contact us.