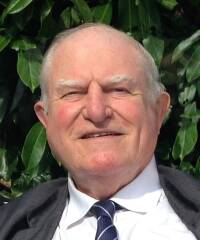 Educated at Kibworth Grammar School and the University of Nottingham, Robert ('Bob') Muddimer enlisted in the RA (TA) as Craftsman. He was commissioned 2Lt in the Royal Artillery (TA) on 8.11.1953, and served in 579th (The Royal Leicestershire Regiment) LAA Regt RA (TA), being promoted Lt on 30.1.1956, and in 'Q' (The Royal Leicestershire Regiment) Battery 438th LAA Regt RA (TA) until joining TARO on 14.10.1962. He made 8 appearances for Leicester FC's 1st XV 1957-58. In civilian life he made full use of his BSc in Mechanical Engineering in materials management. He became a Fellow of the Institute of Electrical Engineering (FIEE) and in 1966 a Fellow of the Institute of Manufacturing Engineering (FIMfgE). He was Materials Manager of Lansing Bagnall 1965-68, Director of BTR Industries Ltd 1969-80, Molins Tobacco Industry Ltd 1981-86, Tomkins plc (which included the US firms Smith & Wesson, the Nashville-based Murray Ohio Manufacturing Company, and the Dayton-based Philips Industries), and Chairman of Ranks Hovis MacDougall 1992-96 and of Gates Rubber Company 1996–97. He lived in Billesdon.
He died in 2019, aged 86 years.
He was a cousin of Major General A J G Pollard CB CBE DL of the Regiment.

Do you have more information about Lt Robert Michael Muddimer - FIEE FIMfgE ?

If you have any further information or photos regarding Lt Robert Michael Muddimer - FIEE FIMfgE that you believe we could publish, please click here to contact us.