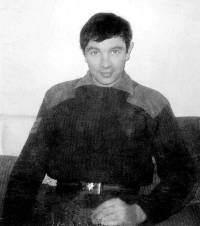 'Stu' Pollitt initially served in the REME, and then re-enlisted in The Lancashire Fusiliers (LF) in 1965, serving in its 1st Bn in Cheshire and Hong Kong. On 1st LF's transition to 4th Bn The Royal Regiment of Fusiliers (RRF), as a Sgt he joined 4th R Anglian in Gillingham in 1968 and served in it in Bahrain 1969-70, in the Signals Platoon, where for a time he was a DJ on the camp radio Radio Hamala. He next joined 1st R Anglian with which he served in the Signals Platoon in Londonderry, Cyprus, Tidworth and Celle. He also served as a PSI in 5th (V) RRF in Northumberland 1976-77. His last posting was as a Training WO at Depot The Queen's Division, Bassingbourn, Cambs 1985-88 for which he was awarded the B.E.M (L.G. 17.6.1989). On retirement from the Army in 1989, in his civilian career he worked initially in Remploy and later helped to set up Oldham Promobility, working predominately with those with disabilities; for this he was short-listed for a Pride of Oldham award. He died in 2019, aged 76 years.

Do you have more information about WO2 Stuart Anthony Pollitt - BEM ?

If you have any further information or photos regarding WO2 Stuart Anthony Pollitt - BEM that you believe we could publish, please click here to contact us.