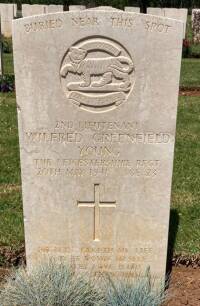 Home address of parents was Cheshire. In 1921 with his parents Wilfred Young aged 3 years travelled by ship from Birkenhead to Kobe, Japan; in 1926 they later crossed the Pacific and Canada. Wilfred made 38 first team appearances for Leicester Tigers FC between 1937-39, and had a trial for Scotland. In 1939 he was a Physical Training Instructor, living in Stamford, Lincs. He enlisted in 1939 as Private 4860318 and served in The Leicestershire Regiment during World War Two. Transferred to 165th O.C.T.U. at Dunbar 15.7.1940, and was commissioned into the Regiment on 1.11.1940, serving in 2nd Bn in the Middle East Campaign. During the battle for Crete in April/May 1941, he was twice wounded, the second time fatally, and died on 2.5.1941, aged 23. He is buried in Suda Bay War Cemetery, Crete, Greece.

His obituary in The Green Tiger of November 1941 states:
“Young joined the Battalion in the Western Desert shortly before we rushed to Crete. In that short time his outstanding personality made itself felt in his platoon and in ‘A’ Company. A keen sportsman, of no mean ability himself, he organized and played games with his men under most difﬁcult circumstances, and entered and encouraged those about him to join in. Those who have served in the desert will appreciate how much good a little sport used to do the men.
"In Crete his company went rushing after parachutists, and Young led his platoon gallantly. He was hit fatally, yet despite his sore condition, he was heard urging his men on, refusing attention for himself.
“Few ofﬁcers have ever joined a battalion and made so many friends among both troops and officers so quickly. His cheerfulness and forceful personality will not soon be forgotten.”

Do you have more information about 2nd Lieutenant Wilfred Greenfield Young ?

If you have any further information or photos regarding 2nd Lieutenant Wilfred Greenfield Young that you believe we could publish, please click here to contact us.