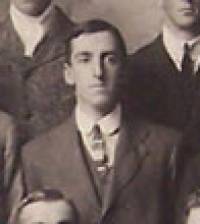 Educated at King Henry VIII School (Coventry) and at Wyggeston School (Leicester), ‘Ken’ Wood was a rugby union centre who played for Stoneygate, one game for Nottingham in 1907/08, and 121 times for Leicester FC between 1906 and 1919, scoring 33 tries and 4 drop goals for points total of 115. He made his Leicester debut on 13.10.1906 at Welford Road against Bristol. He played in two Midlands Counties Cup-winning sides and in 1908 represented Midlands and East Midlands Counties in their win against Australia. He was also a member of the 1910 British Lions tour to South Africa and played in the First and Third Tests. He was thus one of a small band of players who played for the British Lions but not for their country.
He worked as a mining engineer in Nourse Mine Ltd in Johannesburg, and at the outbreak of the First World War he enlisted in 4th Bn The Leicestershire Regiment on 1.9.1914, and he entered France in 1/4th Bn on 2.3.1915. From the rank of Private he was commissioned into 1/4th Bn on 17.8.1915. He was seconded for service in The Machine Gun Corps on 22.2.1916, and promoted Lt on 1.7.1917. He was awarded the M.C. as a Temp Lt while attached to 29th Bn MGC (L.G. 1.1.1918), in which Corps he was promoted Acting Major on 4.3.1918 and was awarded a Mention in Despatches (L.G. 8.7.1919). He returned to The Leicestershire Regiment on 18.2.1920, and was disembodied on 28.4.1920, though he was on the books of 4th Bn in April 1921. He relinquished his commission and was granted the rank of Major on 20.9.1921.
He later emigrated to South Africa where he became a manager at St Michael’s Gold Mine in Johannesburg. He died there in 1968, aged 82 years.
There is a paper file on him in The National Archives at Kew (file ref WO 374/76410).
In 2018 (the 130th anniversary of the first Lions match) the British Lions rugby organisation decided to issue ceremonial caps to everyone who had ever played for the British Lions and, where deceased, to their surviving senior next of kin. Altogether in excess of 900 very ornate embroidered caps in a presentation boxes are being issued, including Cap No. 190 which is in the possession of a nephew, the only surviving relative of Kenneth Wood.

Civil Occupation : Manager of a gold mine

Do you have more information about Major Kenneth Berridge Wood - MC ?

If you have any further information or photos regarding Major Kenneth Berridge Wood - MC that you believe we could publish, please click here to contact us.