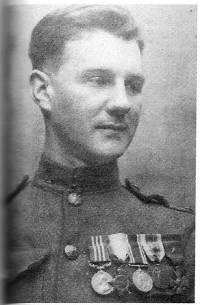 Home town given as Loughborough, Leicestershire. Alf Warner served in 6th Battalion The Leicestershire Regiment during World War One, entering France as a Private on 29.7.1915. He took part in the Battle of the Somme in 1916. In 1918 he was awarded the Military Medal as a Corporal (London Gazette 21.10.1918 page 12418) and French Croix de Guerre [with bronze star] (L.G. 4.12.1919) for gallantry during his part in the fighting on the Aisne in 1918. He died in 1982, aged 86 years. Sergeant Warner's Military Medal, three World War One campaign medals and Croix de Guerre are in the collection of Leicester Arts & Museum Service.

Do you have more information about Sergeant Alfred Stanley Warner - MM ?

If you have any further information or photos regarding Sergeant Alfred Stanley Warner - MM that you believe we could publish, please click here to contact us.