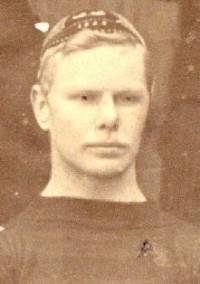 Educated at Edinburgh Academy (1892-86), Cheltenham College (1886-90) and RMC Sandhurst (at both of which he captained the Rugby XV), Arthur Thomson was commissioned into The Leicestershire Regiment on 18.6.1892 and was promoted Lieutenant on 8.1.1894. He made one appearance for Leicester FC's 1st XV in 1895 and scored a try. He served at the Regimental Depot before being attached to the Royal Niger Company for service in what is now Nigeria. He was Killed in Action against the Foulahs at Bida, Nigeria, on 26.1.1897, age 26. He is commemorated on a brass tablet in the Regimental Chapel at Leicester Cathedral; in the Chapel at Cheltenham College there is a memorial plaque and altar rails, purchased in his memory by subscription raised as a result of a letter in The Times, 8.3.1897. Some of the information was provided by Cheltenham College Archives, including the photograph of him in the Cheltenham College rugby XV in 1888.

Two accounts of his death were published in The Cheltenham College Journal.
"While carrying a message from the Commandant, Major Arold, to the Governor, Sir G Taubman Goldie, at the camp, one and a half miles away, Lieutenant Thomson got cut off by the enemy and killed. His body was fortunately recovered by the advance guard on the retirement to camp. Lieutenant Thomson's death cast a gloom over the camp, as he was a capital transport officer, and was liked by everyone. He was buried with military honours, all the officers being present."

An extract from a letter written by the Officer Commanding the Niger-Soudan Expedition: "It was on the first day of the battle of Bida, and at a time when the issue of the battle appeared doubtful, that I sent Lieutenant Thomson as a galloper to hurry up the seven-pound gun, which was delayed on the road, upon which so much depended. He was barely 200 yards from a Company which was falling back on the camp established, when a body of the Foulah Horse swooped down upon him, and before a shot could be fired he fell fighting. He was last seen by his servant aiming his revolver at the nearest of his foes and then the dust cloud arose, and nothing more was seen of him until I, with the main force coming over the ridge across which he had disappeared only a few minutes ago, drove off his assailants and recovered his body. I cannot in words express the regret I felt then and now, for Thomson was one of the hardest workers and most capable officers I had serving under me. He lived like a soldier and died like a soldier, on duty to the last. We buried the body that evening under a huge spreading tree close beside our camp. Sir George Taubmann Goldie KCMG, our Governor, read a short service; three volleys were fired over the grave, and then the assembled officers with their own hands reverently filled in the last resting place of one who was sorely missed by one and all of us."

Do you have more information about Lieutenant Arthur Cleghorn Thomson ?

If you have any further information or photos regarding Lieutenant Arthur Cleghorn Thomson that you believe we could publish, please click here to contact us.