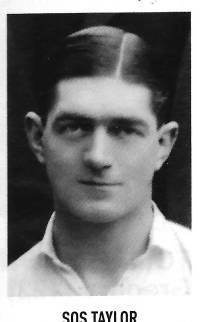 Educated at Medway Street School, Leicester, Frank "Sos" Taylor was a fine lock/back row rugby forward. He played in the first England-Wales schools international in 1904, and went on to represent Leicester F C, Leicestershire and the Midland Counties. He represented Leicester FC before and after the First World War, playing over 276 matches between 1911 and 1924, scoring 36 tries and 108 points. He served in 1/4th Bn The Leicestershire Regiment during the First World War, entering France on 2.3.1915. He was badly wounded on 2.5.1915 in the Ypres Sector trenches. He was disembodied from the Army on 21.2.1919. He was told that he would never play rugby again. However, he recovered so well that in 1920 he played twice for England aged 30, against France at Twickenham and Ireland at Lansdowne Road.
He died in 1956, aged 66 years.

Do you have more information about Cpl Frank Taylor ?

If you have any further information or photos regarding Cpl Frank Taylor that you believe we could publish, please click here to contact us.