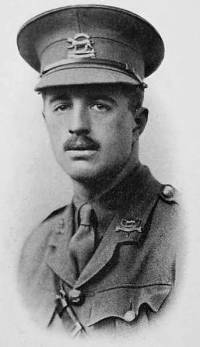 Educated at Stoneygate School, Uppingham School, and University College (Oxford) (where he read Law and was a Cadet Sergeant in Officer Training Corps), 'Frank' Tarr became a solicitor in Leicester. He played Rugby Union for Oxford University (awarded three Blues), Leicester, Headingley, Richmond, and England (for whom he was capped four times, as a centre, thrice in 1908-09 and lastly in 1913). He made 94 appearances for Leicester FC's 1st XV between 1906 and 1913, and scored 24 tries. He was commissioned 2nd Lieutenant into The Leicestershire Regiment on 1.10.1911, and he served in 4th Battalion (TF) at Leicester, being promoted Lieutenant in 1913. On the outbreak of the First World War he enlisted on 9 8.1914 and went to France with 1/4th Battalion on 2.3.1915. He was Killed in Action near Zillebeke in Belgium on 18.7.1915, aged 27. He is buried at Railway Dugouts Burial Ground, Zillebeke, Ieper (Ypres), West Flanders, Belgium.
He is also remembered on the family headstone in Welford Road Cemetery, and on memorials at Leicester FC (Welford Road), Uppingham School, University College (Oxford) (where on the west wall of the Antechapel his name is among those on the stone memorial to members of the College killed in the First World War), Oxford University RFC, the Richmond Athletic Ground (Richmond FC), and at the RFU Museum at Twickenham (where his name is among 27 on a Memorial Board to England Rugby Internationals who fell in the First World War).

Francis Tarr was born on 14 August 1887, at Belper in Derbyshire, the son of Frederick and Emma Tarr.

Played as a Centre for: Stoneygate School Leicester, Uppingham School, Oxford University (Blue 1907-1909), Leicester, Headingley, and England (4 caps between 1909 and 1913).
Remarks: Played for Oxford University vs the 1908-1909 Wallabies (3-19): 'Shortly after Tarr was penalised for failing to release the ball in a tackle and Carmichael landed a neat penalty goal to put Australia ahead 6-0 at half-time.' Of the England v Australia international, 'The First Wallabies' says, 'Shortly afterwards the home pack obtained clean ball and Williamson, the diminutive South African-born scrum half, cut out Ashcroft and passed to his Oxford team-mate Tarr, who sprinted away with the tall blond-haired Mobbs in support. Tarr managed to fend off Russell's attempted tackle and turned the ball infield to the "Bedford greyhound" who promptly shot past a nonplussed Carmichael and scored near the goal posts.' In the second half 'The determined Wallabies stayed camped in England territory, winning a succession of lineouts and scrums until Warden Prentice hoisted a high punt down to Lyon. Somehow the ball eluded his grasp and bounced over his head for Row, following on, to toe it across the line with Tarr hot in pursuit. The England centre lunged for the ball but knocked it forward and Row dived on it near the dead-ball line.' Frank Tarr's two tries for England v France in 1909 were scored at Welford Road, the home of his club team, Leicester.

War service: Frank Tarr enlisted on the first day of the First World War on 9 8.1914. He served in 1/4th Battalion The Leicestershire Regiment, 188th Brigade, 46th (North Midland) Division. He went to the Western Front with his battalion on 2 March 1915, travelling across the Channel on either the Golden Eagle or the Queen Empress. Herewith an extract from 'Footprints of the 1/4th Leicestershire Regiment' by Captain John Milne: Chapter IX - HILL 60

"On the evening of July 13th the battalion left its bivouac at Ouderdom, and took over from the 1st Dorsets the dug-outs in the embankment of the Ypres-Commines Railway near Zillebeke Lake, and also some strong points in the vicinity.
"In peace time Zillebeke must have been a pleasant place. There was a lake on which, doubtless, rowing boats plied, and on fine Sunday afternoons it was probably thronged with holiday-makers. It was an entirely different place now. In the embankment of the lake there were dug-outs facing away from the lake, and opposite them in the side of the railway embankment were the dug-outs which the Leicesters now occupied. They were by no means safe and hardly shrapnel-proof, they let in the rain, and a few well-directed 'Krumps' would soon have destroyed them and their occupants. However, they gave some shelter from the elements and a certain feeling of security. The Germans had never paid them more attention than a few 'whizz-bangs' and an occasional 'Krump', so everyone made themselves comfortable and hoped for the best.
"The supports for the front line held these dug-outs, and were employed at night on carrying and digging fatigues, and had orders to be seen as little as possible. So the daytime was spent in idleness, a lot of sleep, a good deal of cards and a little fishing with bent pins in the pond.
"In the space between the lake and the railway dug-outs was a road up which the transport rumbled at night, a line of poplars which were gradually becoming more war-worn and a little cemetery which was steadily getting bigger. In the distance stood Ypres and the battered Cloth Hall daily getting more of a ruin, and just outside Ypres the red brick Ecole de Bienfaisance, which the Germans shelled industriously daily raising dust clouds of couleur de rose.
"Owing to the rising ground eastward the railway embankment soon ended, and the railway ran along the level for a little way, then into a cutting and finally into the German lines. On the North of this cutting was Hill 60, so called from the ring contour marking it on the large scale maps. It was in reality an artificial mound made from the earth excavated in making the cutting. Anyone who goes to Hill 60 now and stands by the Memorial on its crest will realise what it meant to the Germans. It gave them a wonderful view of the whole Salient, and enabled them to see any movement of troops; but there was also a magnificent view eastwards right back to Commines, and, if the British could have held the crest, it would have been a tremendous advantage to them, and made life for those in the Salient much less precarious.
"Hill 60, therefore, was of very considerable military importance. The British had taken it on April 17th, but they had been unable to hold it. There had been heavy fighting on it, and also one of the German gas attacks had been launched there with considerable success; the gas had hung about the cutting and there had been many casualties.
"So already this was historic ground and the atmosphere was charged with uncertainty and occasional 'whizz-bangs', and one felt that anything might happen at any time. This was the fighting part of the Front, though not very obviously, for it seemed just an ordinary railway cutting with the metals intact, no one was in sight except an orderly or two peeping out of the headquarters dug-out in the cutting. Hill 6o looked just a bare barren waste; and south of the railway there was a scarred-looking wood on the horizon and a wrecked red brick building, which was once the Verbranden Molen. It was advisable, however, to step warily, for the all-seeing Boche on the high ground had ordained that where two or three were gathered together there should be a 'whizz-bang' in the midst of them.
"From July 13th to the 19th the battalion remained comfortably in the railway dug-outs basking in the sunshine and complacently watching Ypres being shelled during the day and uncomplainingly carrying out fatigues by night. So far so good. On the 18th, however, there was a tragedy. Lieut. F. N. Tarr was killed. You had to know Frank Tarr and to be in the battalion to realise what that meant; no words can ever explain.
"He was killed by a splinter from a 'Krump' whilst he was visiting the Zillebeke Lake dug-outs. The Boche was industriously shelling a field cooker which stood under a hedge close by, and Tarr put his head out of a dug-out to tell some men to keep under cover when a splinter hit him in the face. If it had been any other part of his body it would have caused only the slightest of wounds, a mere scratch, but that only made it more tragic. This happened in the afternoon.
"That night, surrounded by his friends, he was buried not very far from where he had fallen, and the Brigade Chaplain (Rev. Paul Ashby) read the burial service. It was a sad night for everybody, for Frank Tarr was the most attractive personality in the battalion, young, good-looking, full of charm, with an eye that always had a twinkle in it, a born leader, yet the kindest person possible, a Rugger international, the idol of the machine-gun section, which he commanded before he became adjutant.
"Everybody was heartbroken, for everybody would miss him; they would not look upon his like again. And so, as the darkness fell, they buried him by stealth, with silent salutes and stifled tears. And the transport officer (Lt W.B. Jarvis), who had played David to his Jonathan, caused a large white cross of wood to be made, a larger cross than any which stood around, that all who passed might see and remember a great three-quarter and a greater gentleman."

A memorial service to commemorate the life of Frank Tarr was held at Leicester FC's home ground at Welford Road on 10 May 2009; The Last Post was sounded simultaneously in Leicester and at Ypres.

A more extensive description of his life and career can be found at https://en.wikipedia.org/wiki/Frank_Tarr

Do you have more information about Lieutenant Francis Nathaniel Tarr ?

If you have any further information or photos regarding Lieutenant Francis Nathaniel Tarr that you believe we could publish, please click here to contact us.