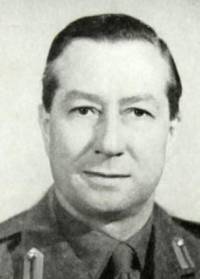 Educated at Rugby School, Ken Symington was commissioned 2Lt in The Leicestershire Regiment on 15.12.1924. He served in 5th Bn (TA) and was promoted Captain 30.10.1932. Served as 2IC 2/5th Bn in France and Belgium 1940. After a period at home (North Berwick, Scotland, and also was billetted for a time in Manchester Zoo), in 1942 he went to Ceylon and served on Mountbatten's staff in HQ SEAC. He was a keen sportsman, rugby football in the early days, golf and shooting latterly. He made 4 appearances for Leicester FC's 1st XV in 1928, and scored one try. Commanded the re-formed 5th Bn (TA) 1947-1950, and later served as a Colonel (TA). He was a Director of Symington's Soups. Appointed a Deputy Lieutenant for Leicestershire on 20.12.1950. Died at home in 1963, aged 57 years. Brother of Captain S P Symington MC TD and of Lt N H Symington of the Regiment.

Do you have more information about Colonel Kenneth William Symington - TD DL ?

If you have any further information or photos regarding Colonel Kenneth William Symington - TD DL that you believe we could publish, please click here to contact us.