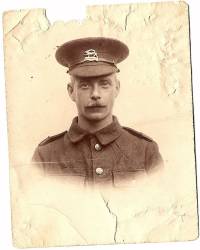 His grandson relates, "My grandfather spoke to me once of entering Jerusalem with Allenby, of seeing an aircraft (a thing of wonder) in a wadi, of being wounded by artillery fire, of being on leave in Egypt and seeing the pyramids".

Do you have more information about Pte Harry Oakley Stott ?

If you have any further information or photos regarding Pte Harry Oakley Stott that you believe we could publish, please click here to contact us.