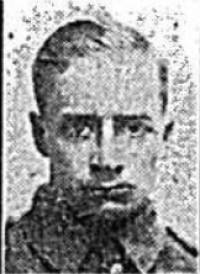 Some information from a private source.

It must have been a great blow to William and Jane Headley of Heckmondwike to learn that two of their grandsons had been killed on the same day - 23.10.1918. These notes focus on one of their grandsons – John William Spink. The details of the other grandson, his cousin Harry Headley are not included here.

John was born in 1895, the first child of Thomas and Mary Ann Spink. They had married on 23.12.1894 in Bilborough near York. Thomas had worked on farms in the area. Mary Ann was born in Northallerton around 1878 and was a younger sister of Isabel Headley, later to be the mother of Harry. The sisters worked together for a time in the household of a vicar near Richmond. Mary Ann was a 14 year old nurse there in 1891.

John Spink enlisted under the Derby Scheme in the West Riding Regiment in Heckmondwike sometime in 1916. He was wounded in France in 1917 and after recovering in the UK he returned to France on 15.9.1918. It is possible that at this point he transferred to the 1st Leicestershire Regiment with service number 52041.

Pte. Spink was soon back in action. On Wednesday 23.10.1918 three British Armies attacked along their entire front. This was the period of more mobile warfare and prepared trenches were a thing of the past. At 01.24 on the 23.10.1918, the battalion moved forward from their positions near the village of Bazuel. Pte. Spink’s cousin Pte. Headley was attacking at the same time a short distance away on the other side of what is now the D463 road leading to the Oise Canal. The Leicestershires had great difficulty in moving forwards through an area of orchards and thick hedges (see note for Pte.Headley). These delays meant that any protection from the creeping barrage was lost. In the darkness and confusion some soldiers were reported to be heading towards Pommereuil where Pte. Headley’s battalion was in action. The soldiers faced artillery and machine gun fire as well as snipers firing from amongst the trees. Support was given by elements of the American Tank Corps, but by 12.30 pm on 23. October 3 officers and 74 soldiers had reported wounded to the Regimental Aid Post. In the afternoon the Leicestershires were told that they would be relieved by the 2nd Sherwood Foresters, but they were delayed and did not fully take over until early hours of 24 October, by which time the Germans were in retreat towards the Oise Canal and the River Sambre.

On 3.5.1919 outstanding pay of £11 16s 11d, which included a £8 war gratuity was sent to John’s brother Edward who received £5 18s 6d and his sister Ethel who received £5 18s 5d. John Spink was awarded the British War Medal and Victory Medal. He is buried in St. Souplet British Cemetery which lies around five miles from Pommereuil where his cousin is buried. He is remembered on the Heckmondwike War Memorial in Green Park, The Book of Remembrance in Heckmondwike Library, and on the WW1 Memorial of Norristhorpe Congregational Church.

As well as Harry Headley and John Spink, two uncles, who survived the war, are also remembered in the Heckmondwike Roll of Honour at Heckmondwike Library. All four have been given the same address of 9 Brooke Street, Heckmondwike. The surviving sons of William and Jane Headley are Fred Harper Headley, Pte. 13740 of the Yorkshire Light Infantry. He was awarded the 1915 Star, the British War Medal and the Victory Medal. Christopher Henry Headley was in the Royal Garrison Artillery, Gunner 388213 and was awarded the British War Medal and the Victory Medal.

Do you have more information about Private John William Spink ?

If you have any further information or photos regarding Private John William Spink that you believe we could publish, please click here to contact us.