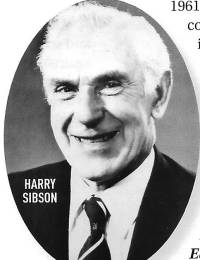 Educated at King Richard's Road Intermediate School, Harry Sibson enlisted on 15.12.1939, and served with The Leicestershire Regiment during World War Two, rank and unit as yet unknown. He transferred to The Royal Engineers on 4.3.1943, and went to Normandy after the D-Day Landings in June 1944, working as a diver to repair storm damage to the Mulberry harbour. He also worked to repair bomb damage at Calias docks and to defuse underwater mines. After the war he returned to work as a monument mason at the Great Central Street yard. He played rugby for Old Ricadians and Aylestonians, and also Leicester FC's 1st team 183 times 1947-54; he was reserve for an England trial in 1950 and played for Leicestershire & East Midlands against South Africa in 1951. He was Leicester FC's first-team secretary 1969-79, and Club President 1981-83. He died in 2010, aged 80 years.

Do you have more information about Harry William Sibson ?

If you have any further information or photos regarding Harry William Sibson that you believe we could publish, please click here to contact us.