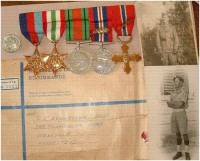 Charles Rowlinson enlisted in The Leicestershire Regiment on 7.3.1933 as Private 4856947. Appointed Paid Lance Corporal 7.6.1935 and was serving with 2nd Bn in Aldershot in 1936. Re-enlisted in 5th Bn The Leicestershire Regiment on 16.11.1937. He was in 1/5th Bn in the Norway Campaign of April/May 1940, where for his actions as a Platoon Sergeant Major (WO3) at Tretten on 23 April he was awarded a Mention in Despatches (L.G. 4.4.1941) and the Norwegian M.C. with Sword (L.G. 4.8.1942). He is granted an emergency commission as a 2nd Lieut on 6.1.1941, confirmed 25.6.1941, and for a while served in a Young Soldiers Battalion. In 1943 he was serving in The Royal Northumberland Fusiliers. In 1944 he was invalided home from overseas as 'no longer fit for military service', and relinquished his commission on grounds of ill-health on 27.11.1944, being granted the Honorary rank of Lt. He died in 1993, aged 79 years.
"He suffered severe injury on the last stand they made and upon return it was discovered he had a shrapnel head wound. This eventually led to him losing his right eye. He spent a little over 6 months in hospital but on his discharge he was transferred from The Leicestershire Regiment to The Lancashire Fusiliers. He went on to North Africa helping to take charge of the Italian prisoners who were surrendering in their hundreds. From there he moved on with them into Italy."

Father of Corporal James Rowlinson of the Regiment.
Some information from private source.

Do you have more information about Captain Charles Joseph Rowlinson ?

If you have any further information or photos regarding Captain Charles Joseph Rowlinson that you believe we could publish, please click here to contact us.