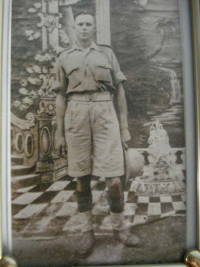 Awarded 3rd Class Certificate of Education (as Lance Corporal) serving with the 1st Bn in 1908. Promoted Lance Sergeant 19.5.1910. As a Sergeant in 2nd Bn from India he entered France on 12.10.1914. Joined the Battalion in the field from 30th Reinforcements on 12.10.1915. Travelled with 2nd Bn via Egypt to Mesopotamia, where he was wounded in action during 6-8th January 1916. As a CSM he was awarded a Mention in Despatches (L.G. 15.8.1917) and the Distinguished Conduct Medal (L.G. 29.8.1917: "For gallantry and distinguished service in action. In the attack he has always inspired courage and confidence in the men of his company by continually moving about under heavy fire, encouraging them by a total diregard of his own personal safety. He has repeatedly done excellent work, and is an example of courage and determination."). Also awarded the French Medaille Militaire. Later served as 40224 Acting WO1 in The Hampshire Regiment. In World War Two he was awarded the Defence Medal for his service with 3rd Bn Leicestershire Regiment Home Guard.
He died in 1965, aged 77 years.
His Medals are in the collection of Leicester City Museums Service.

Do you have more information about Company Sergeant Major William James Pyne - DCM ?

If you have any further information or photos regarding Company Sergeant Major William James Pyne - DCM that you believe we could publish, please click here to contact us.