Educated at Worcester College (Oxford), William Parker purchased his commission as Ensign in 17th Foot on 12.1.1855, Commissioned Lieutenant 19.6.1855, Captain by purchase 15.1.1861. Served in Crimean War arriving on 6.9.1855, and was wounded in the battle for the Great Redan on 18.9.1855. Was serving with the 1st Bn in Canada in 1864. His service also included England, Ireland and India. He commanded the Depot from 1873 until 1877 when he retired as a Lt Col. On retirement he studied land agency, became a member of The Surveyor's Institute, held the agencies of several large estates in Worcestershire, and rode to hounds with the Worcestershire Hunt Club. In 1896 he met with a tricycle accident from which he never quite recovered, and he died in 1902, aged 69 years. He was a recipient of the Crimea Medal with Sebastapol clasp which was presented to the Regimental Museum on 12.7.1954 by his daughter-in-law Mrs Parker of Malvern, and is now in the collection of Leicester City Museums Service. Also presented that day were: a double-headed eagle, taken down from the Customs House in Sevastopol by soldiers of the then-Captain Parker's Company in 1955; and a helmet badge picked up at Sevastopol in 1955. 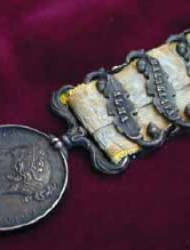 Do you have more information about Lt Col William Henry Parker ?

If you have any further information or photos regarding Lt Col William Henry Parker that you believe we could publish, please click here to contact us.