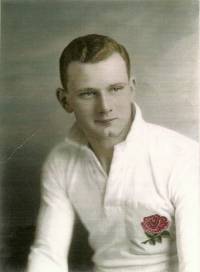 Tony Novis was educated at Epsom College and Oxford University (Brasenose College). Played Rugby for Leicester F C (making 3 appearances for its 1st XV between 1928 and 1931), Blackheath, the Army, Yorkshire, the Combined Services, the Barbarians, the British Lions (1930), and England (7 caps, twice captain). He was commissioned 2nd Lt 16.2.1929 into The Leicestershire Regiment, serving in 2nd Bn in Londonderry (promoted Lieutenant 16.2.1932), Aldershot, Palestine and Egypt. As OC D Coy, he was wounded at the battle of Sidi Barani in Egypt on 10.12.1940, for his actions in which engagement he was awarded the M.C. He commanded the 1st Bn in UK and Normandy from 7.1.1944 to 30.7.1944, when he was wounded near Caen, and 1st Bn again in Germany from 4.7.1945 to 8.3.1947. He then commanded 2nd Bn in India from Jun 1947 to 15.1.1948, whereafter he commanded Depot Royal Leicesters at Glen Parva Barracks. His final appointment was as Staff Officer Physical Training (SOPT) at HQ Northern Command from which he retired on 8.10.1954. He died in 1997, aged 91 years.
He has a memorial plaque in the Regimental Chapel in Leicester Cathedral. One of his Regimental rugby caps is in the collection of Leicester Arts & Museum Service.
In 2018 (the 130th anniversary of the first Lions match) the British Lions rugby organisation decided to issue ceremonial caps to everyone who had ever played for the British Lions and, where deceased, to their surviving senior next of kin. Altogether in excess of 900 very ornate embroidered caps in a presentation boxes are being issued, including Novis' cap No. 262, which is in the possession of his son.

Do you have more information about Lieutenant Colonel Anthony Leslie Novis - MC ?

If you have any further information or photos regarding Lieutenant Colonel Anthony Leslie Novis - MC that you believe we could publish, please click here to contact us.