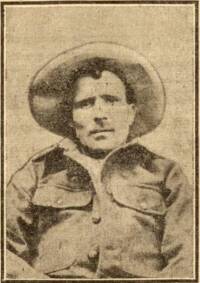 Thomas Newcombe enlisted 20.6.1908 and served in 2nd Bn The Leicestershire Regiment in World War One, entering France on 29.11.1914. He was awarded the Distinguished Conduct Medal and the Russian Cross of the Order of St. George (4th Class). London Gazette citation for D.C.M. 5.8.1915 reads "For conspicuous gallantry on the night of the 15th/16th May 1915 near Richelbourg L'Avons. An officer was severely wounded during a night attack about 20 yards from the German parapet, and at 1.30 a.m. Private Newcombe voluntarily went out under heavy fire of rifles, machine guns, shrapnel, and mortar, to bring him in. The officer was too badly wounded to move, and Private Newcombe, although wounded himself, remained with him all night and until he died on the evening of the 16th, doing what he could for him. He crawled back to our lines after dark exhausted with fatigue and exposure". He was discharged on 10.5.1918 due to the wounds he received that night. His medals are in the collection of Leicester City Museums Service.

Do you have more information about Lance Corporal Thomas Newcombe - DCM ?

If you have any further information or photos regarding Lance Corporal Thomas Newcombe - DCM that you believe we could publish, please click here to contact us.