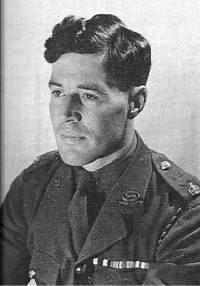 Educated at Oundle School and after a year at Reading University, Peter Moore enlisted in the Royal Artillery in 1941 and transferred to The Leicestershire Regiment later that year. Commissioned into the Regiment in Sep 1942, he was posted to 2/5th Bn at Dymnchurch and served with it almost continually till its disbandment in 1946. Served in Algieria and Tunisia. Temporarily attached to 2nd Bn The North Staffordshire Regiment May-June 1943 for the capture of the island of Pantellaria. Returned to 2/5th Leicesters for the landing at Salerno, Italy. Wounded at Salerno 14.9.43 and after convalescence rejoined Bn in Palestine in May 1944. Returned with it to Italy. Awarded the M.C. for his bravery as a Platoon Commander at Mondaino, Italy, 30/31 Aug 1944 (L.G. 8.2.1945). Remained with Bn during action in Greece and then back to Italy, and to Austria at the end of the War. OC D Coy when the Bn was disbanded in Apr 1946. He was posted to 2nd Bn The Monmouthshire Regiment in Pola near Trieste, and was demobilised in July 1946.
After the War he studied Agricultural Science at Magdalen College, Cambridge, gaining a Blue for rugby football in 1947 and 1948. He made one appearance for Leicester FC's 1st XV in 1947. He then farmed on what is now the Donington Park Race Circuit. He was chairman of the Trustees of the Grade 1-listed Sir John Moore School in Appleby Magna, Leicestershire (which was designed by Sir Christopher Wren and built by an ancestor whose other great endowment was Christ‘s Hospital, now in Horsham). He held the post for 50 years, continuing an unbroken line of family trustees since the school was founded. He was also for many years a Tax Commissioner and on the regional committee of the National Trust. Author of "No need to worry - Memoirs of an Army Conscript 1941-46", published in 2002 ISBN 0 947828 95 8.
Son of Lt Col Aubrey G de A Moore MC, The Leicestershire Regiment. Record Serial No 41615.

Place of Birth : Much Wenlock, Salop

Do you have more information about Major Peter John de Appleby Moore - MC ?

If you have any further information or photos regarding Major Peter John de Appleby Moore - MC that you believe we could publish, please click here to contact us.