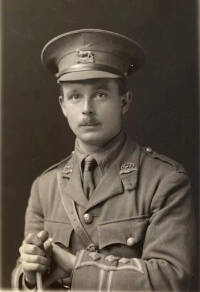 Educated at St Edward's School, Oxford and Wadham College Oxford, Harold Jeffries made four appearances for Leicester FC's 1st XV in 1905. He joined 5th Bn The Leicestershire Regiment in about 1903. Promoted Captain on 20.2.1911. He was serving with 'E' Company 5th Bn as at 1912. Appointed Instructor in Musketry of that Bn in 1914. Later served with 1/5th Bn in World War One and commanded D Company, leading which he was killed on leaving trenches near Hooge Salient on 26.9.1915, aged 32. His CO wrote, "We were leaving trenches last night, and when he had got about half-way to the intermediate line he was hit through the head by a rifle bullet and killed instantaneously."
He is buried at Lissenthoek Military Cemetery, Poperinge, West-Vlaanderen, Belgium.

Do you have more information about Major Harold John Fotheringham Jeffries ?

If you have any further information or photos regarding Major Harold John Fotheringham Jeffries that you believe we could publish, please click here to contact us.