Intended to reward commissioned officers below field rank for distinguished service in time of war, and for which the VC would not be appropriate. Previously the CB had sometimes been awarded to junior officers, although intended mainly for those of field rank.

As a result of the 1993 Review of gallantry awards and resultant changes to the operational gallantry award system, the DSO is now awarded for 'Leadership' only- theoretically to all ranks (it is not awarded posthumously). It has been replaced by the Conspicuous Gallantry Cross as the reward for gallantry. 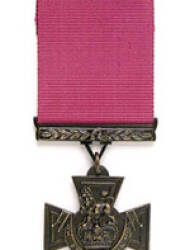